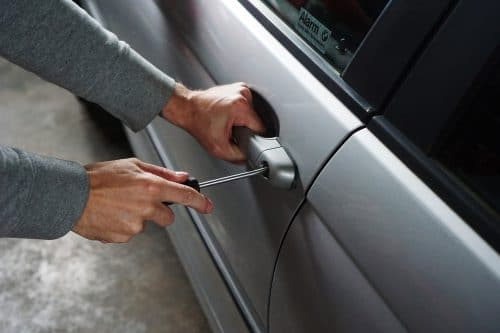 More and more people are becoming victims of car theft in Dallas-Fort Worth. While some thieves choose their victims at random, many choose the easiest targets. Here are some statistics about DFW car thefts that you need to know, as well as ways to prevent them.

According to a report by CBS 11 (done in conjunction with the Dallas police auto theft unit), a vehicle is stolen every 54 minutes, on average, and it’s getting worse. In fact, auto thefts in North Texas increased more than 18 percent from 2017 to 2018.

2. It takes just three minutes (and minimal skill) to steal a car.

It’s easiest to steal vehicles when the keys are left inside (which many people do; see statistic No. 5), but even if you have a newer car with chip keys and/or push-start technology, a good car thief can steal the car in just three minutes, according to the above CBS 11 report.

If you live or work in this area, located just north of Love Field, you might want to take extra precautions. Out of all the ZIP codes in Dallas, this is the one that has the most reported stolen cars, according to CBS 11. In Fort Worth, the worst ZIP code is 76119 (Southeast Fort Worth).

4. Ford and Chevrolet are the most-stolen car brands in Texas.

5. Four out of 10 DFW stolen cars are because the keys were left inside the vehicle.

The CBS 11 report also points out that car thefts are increasing because people are leaving their keys in their cars. “It would help us out a lot if people would just keep track of their keys,” Sergeant Bryan Roden said. “People should treat their keys like they treat cash or their wallets.”

How to Prevent DFW Car Thefts

That brings us to ways you can prevent yourself from being a victim of car theft in Dallas-Fort Worth. Here are some tips:

Don’t become a statistic. To learn more about improving the security of your automobile, give the A-1 Locksmith team a call today at (972) 284-7500.