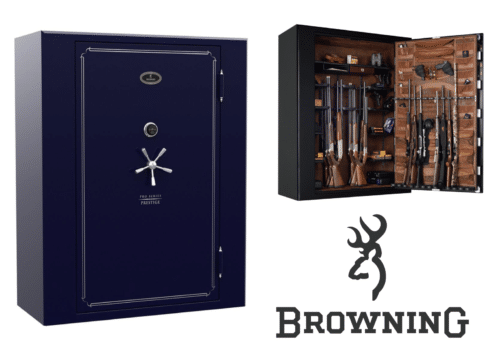 Browning is well-known for its firearms and outdoor products. Its founder, John Browning, was a renowned firearm designer, creating iconic guns like the Winchester Model 1885, Remington Model 17 and Browning Hi-Power, just to name a few. Browning has a robust selection of ammunition and hunting/fishing gear as well.

But did you know Browning is also a top-tier name in the safe world?

Let’s take a look at how the company got started, when it started producing safes and what Browning safe options are available today (plus where you can get one).

How It All Started

As mentioned above, John Browning founded the company with his brother Matthew Browning in 1878. They started out in Ogden, Utah, where they initially had the goal of promoting John’s innovative firearm designs—which included pistols, shotguns and rifles. John’s designs have since been manufactured by several other companies (e.g. Winchester, Colt, Remington) and Browning as a company has expanded to other products like fishing gear, knives, bicycles, bows and more. But they started out with firearms.

The Transition to Safes

One area the company expanded to after it started experiencing success was security. As a predominantly firearm and ammunition company, it makes sense that Browning would want to create safes for storing guns and ammo. A few decades ago, they did just that, contacting another Utah company, Provo Steel & Supply (aka ProSteel) to team up and start making a line of gun safes.

Browning ProSteel Safes (as the partnership was called) separated itself from other safe manufacturers with a unique door storage system that allowed for the storage of long guns on the door of the safe itself. Another unique feature of Browning safes is a patented door-locking system that deflects force, making it more secure. Because of these differentiators, Browning rose in popularity among firearm owners looking for a reliable gun safe.

Today, Browning and Liberty safes are among the most respected in the industry. Ask any professional locksmith about the brand of safe that they’d recommend and you’ll hear Browning or Liberty more often than not. Browning safes come in a wide variety of sizes, styles, prices, security levels, finishes and ratings. No matter your need or budget, there’s a Browning safe that’s right for you.
If you’re interested in a Browning safe (or another well-respected safe brand), visit any of our DFW-area locations or browse our online selection today.